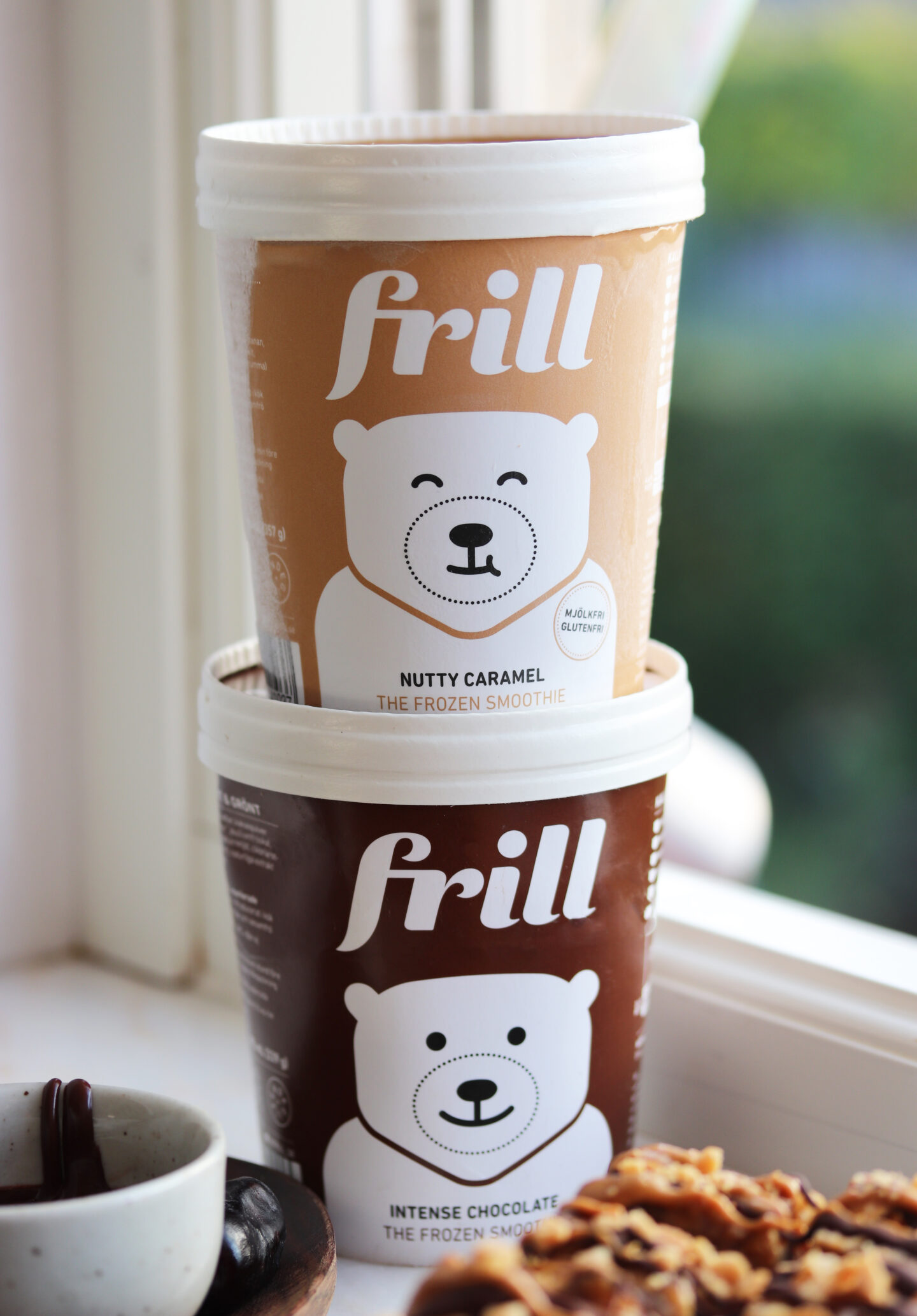 Frill is an amazing UK-based company, that, more or less, recently launched their products on the Swedish market. They call their ice cream “The frozen smoothies”, which is a spot on description!

At the moment, they’re carrying four different flavours, but I’d, personally, love even more. In addition, I’d like to see more stores in Sweden sell their ice cream. At the moment, it’s a 20 minute drive for me to get to the closest store that sells it. Luckily, that store is just by my dad’s work, which is very handy when you’re as big of a fan of Frill as I am.

Anyhow, I hope you find this review helpful! 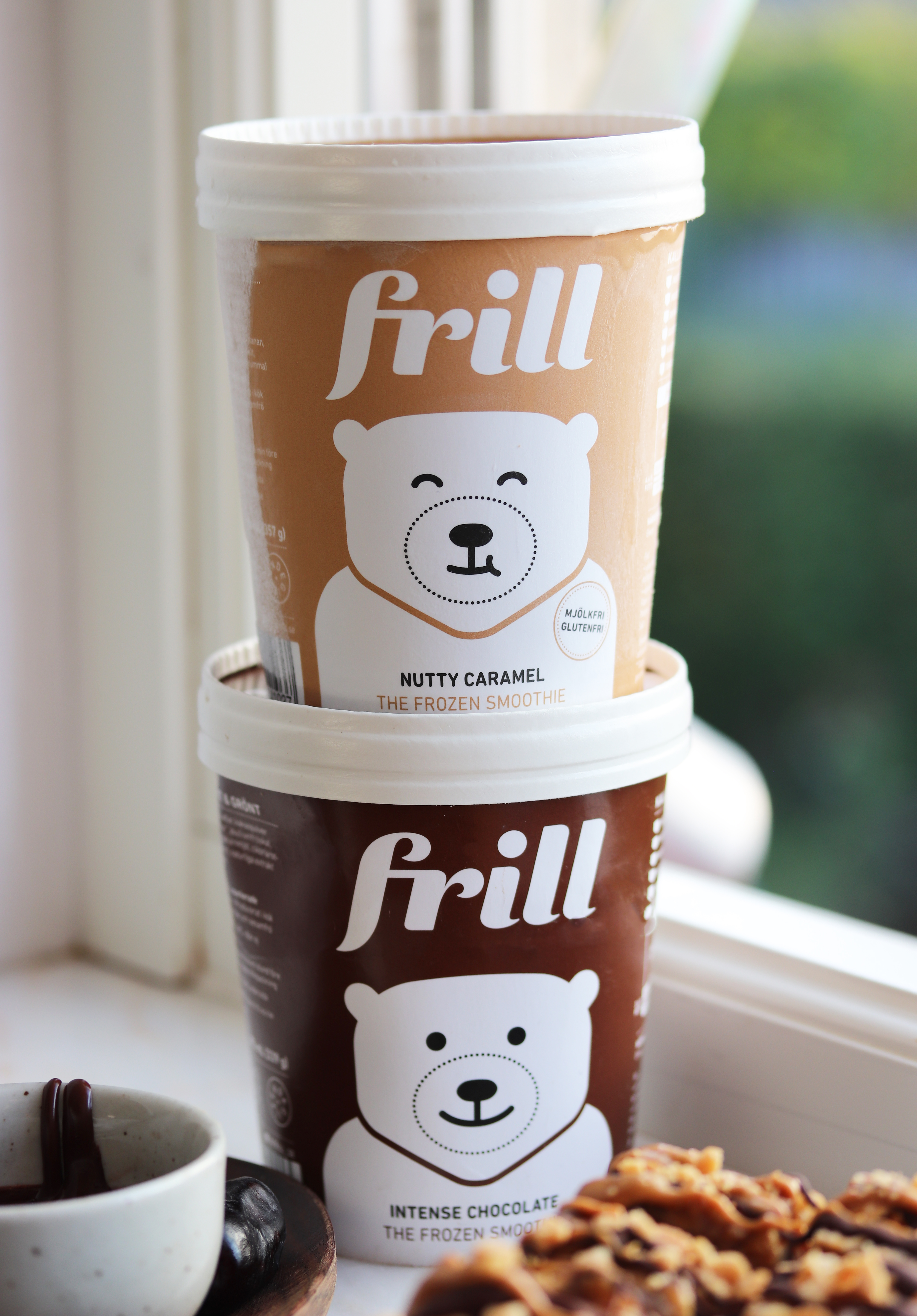 Intense Chocolate and Nutty caramel Frill figuring in one of the pictures for my Snicker ice cream bites. (Recipe is on my blog) 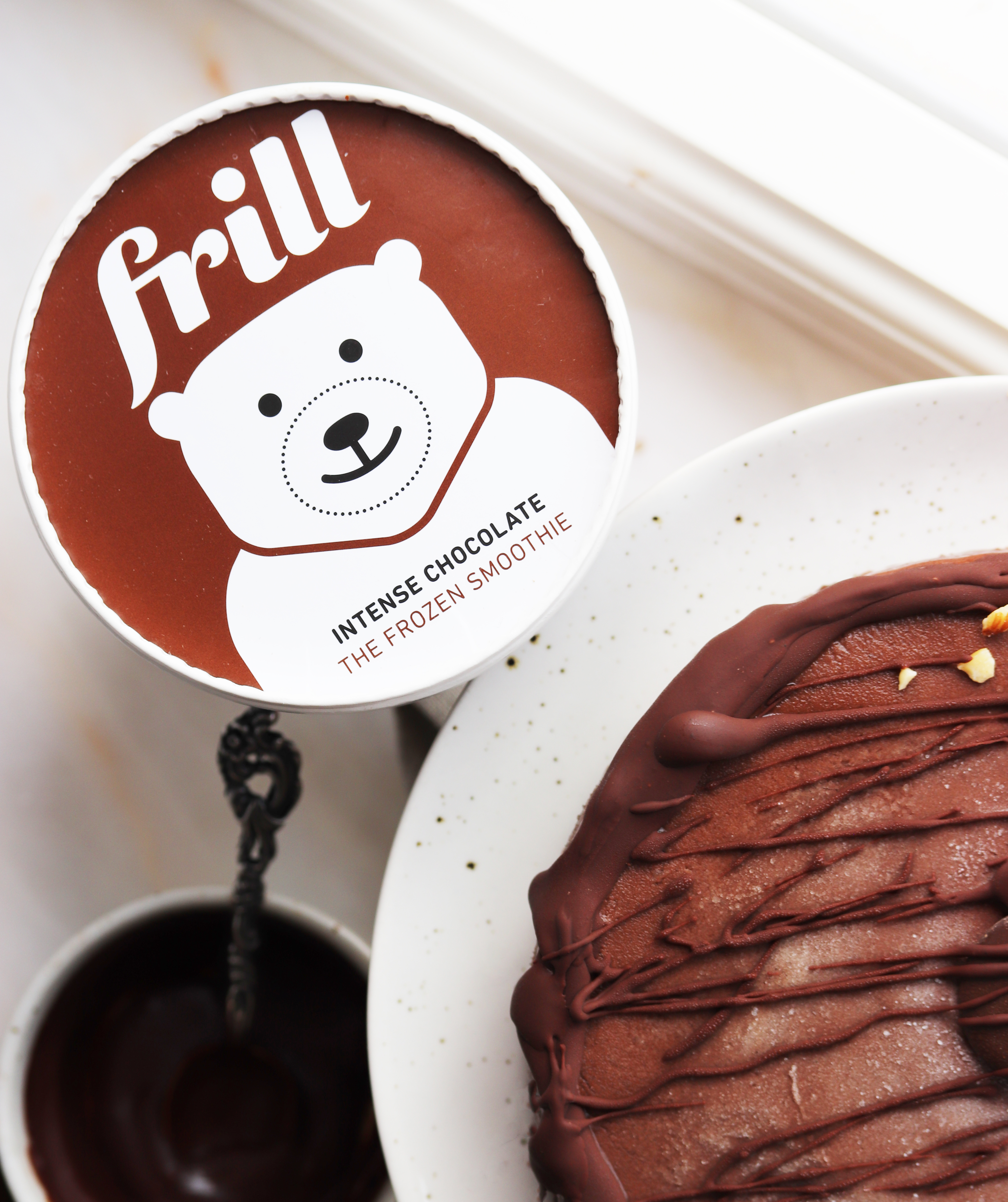 A package of Intense Chocolate Frill figuring in one of the pictures for my Triple chocolate ice cream cake with Frill. (Recipe is on my blog) 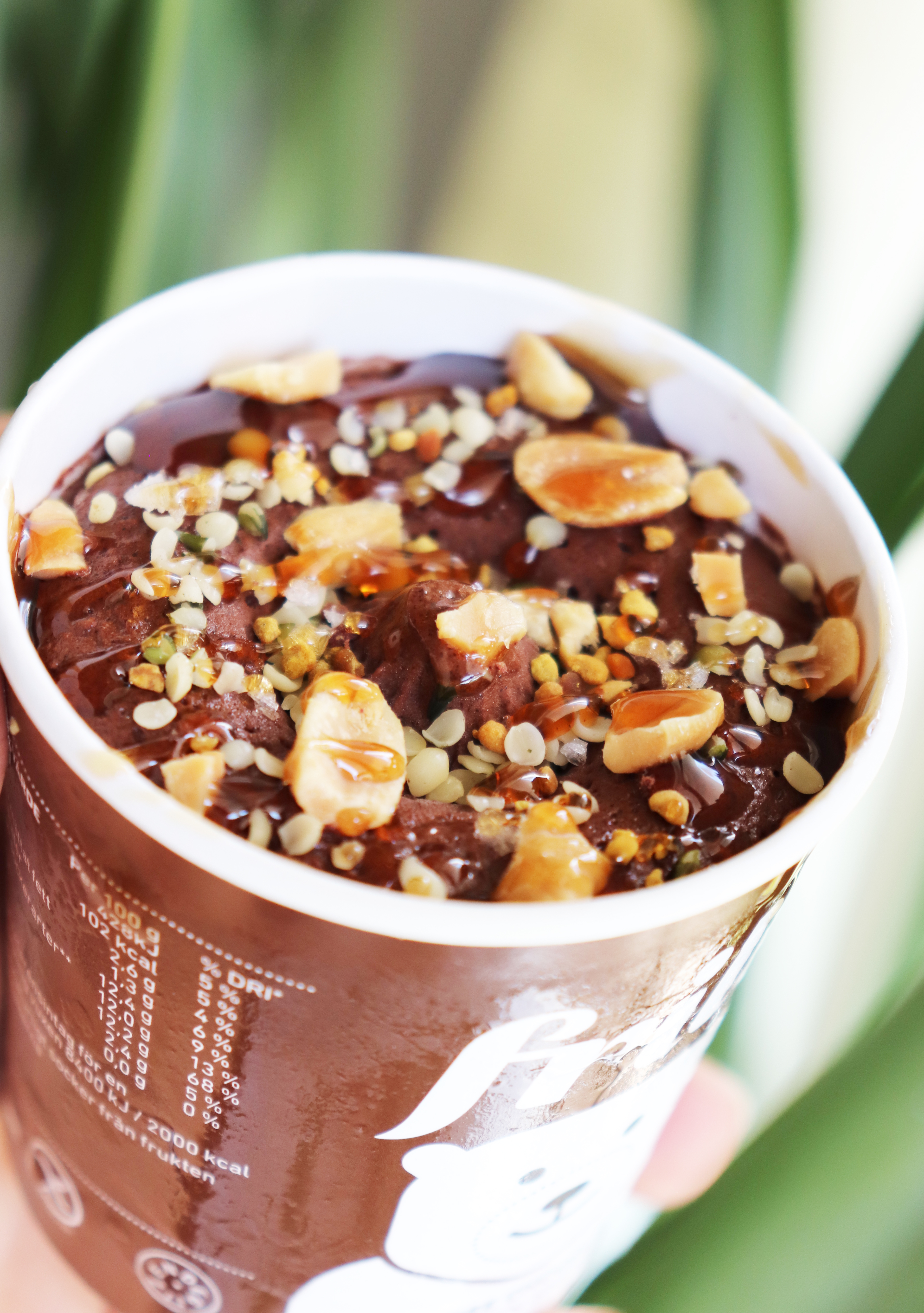 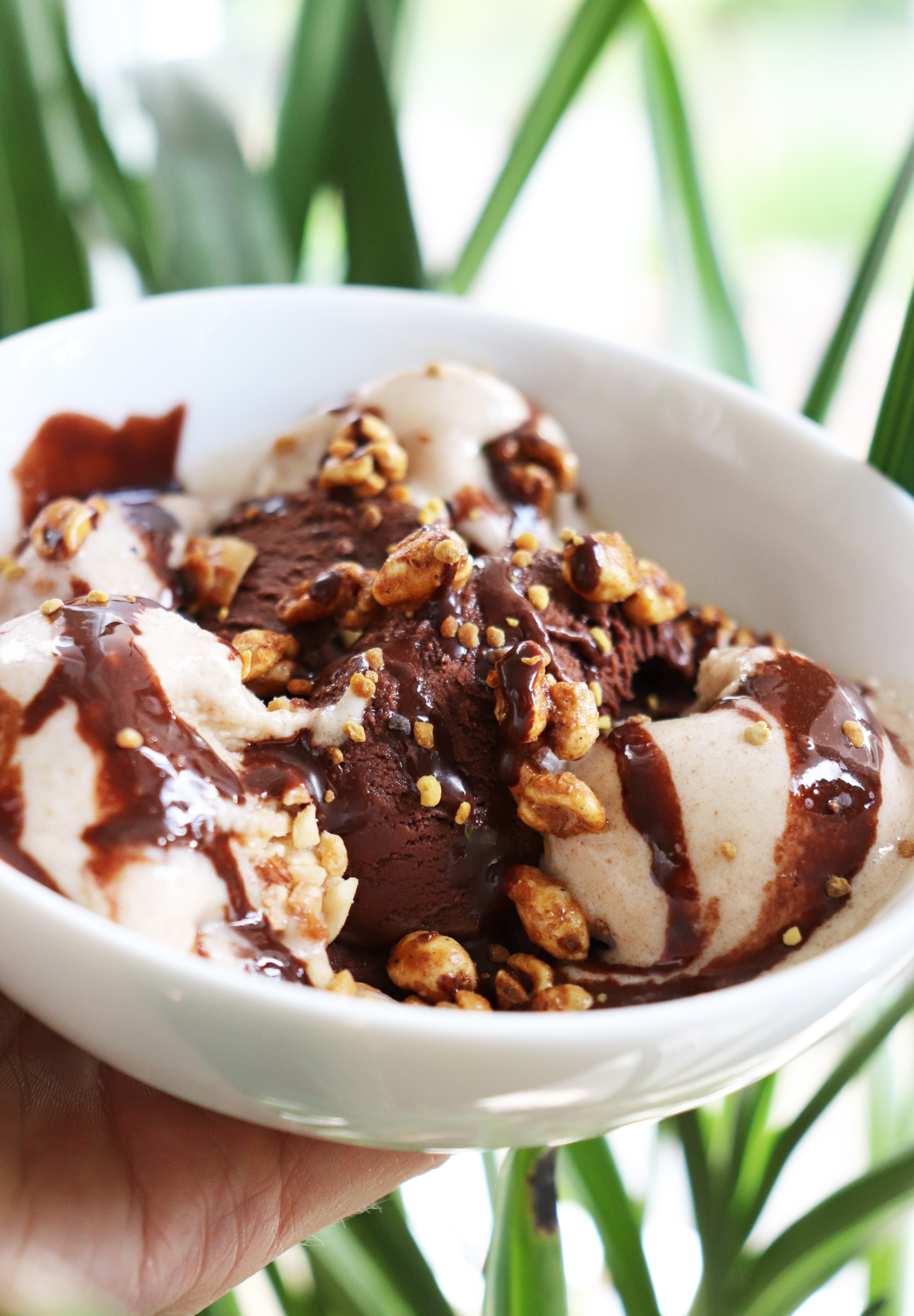 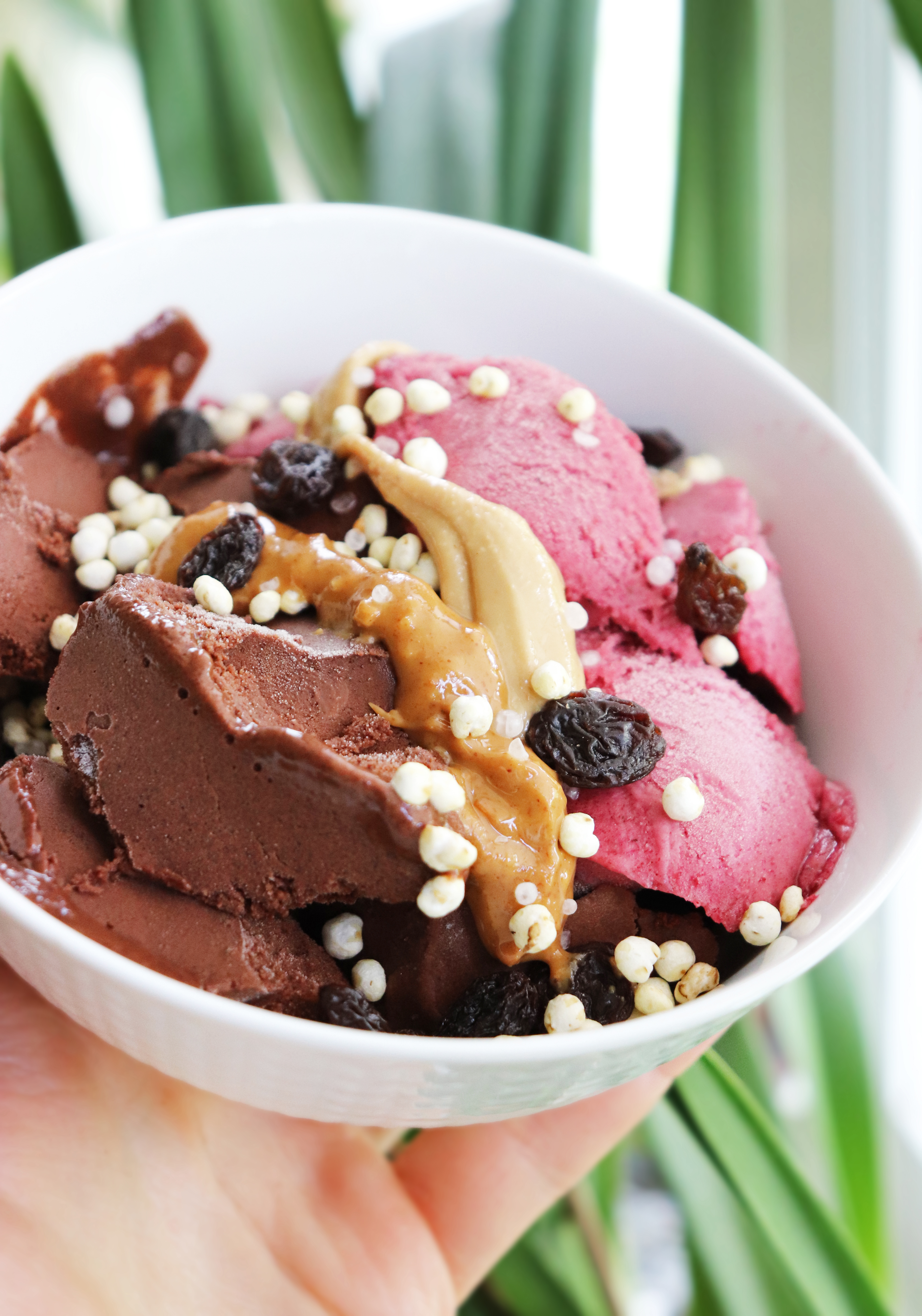 Here’s what a bowl of Frill sometimes looks like when I have it for snack. It consists of some Intense Chocolate and Bursting Berry Frill topped with nut butter, raisins, and puffed millet. Ugly but delicious! 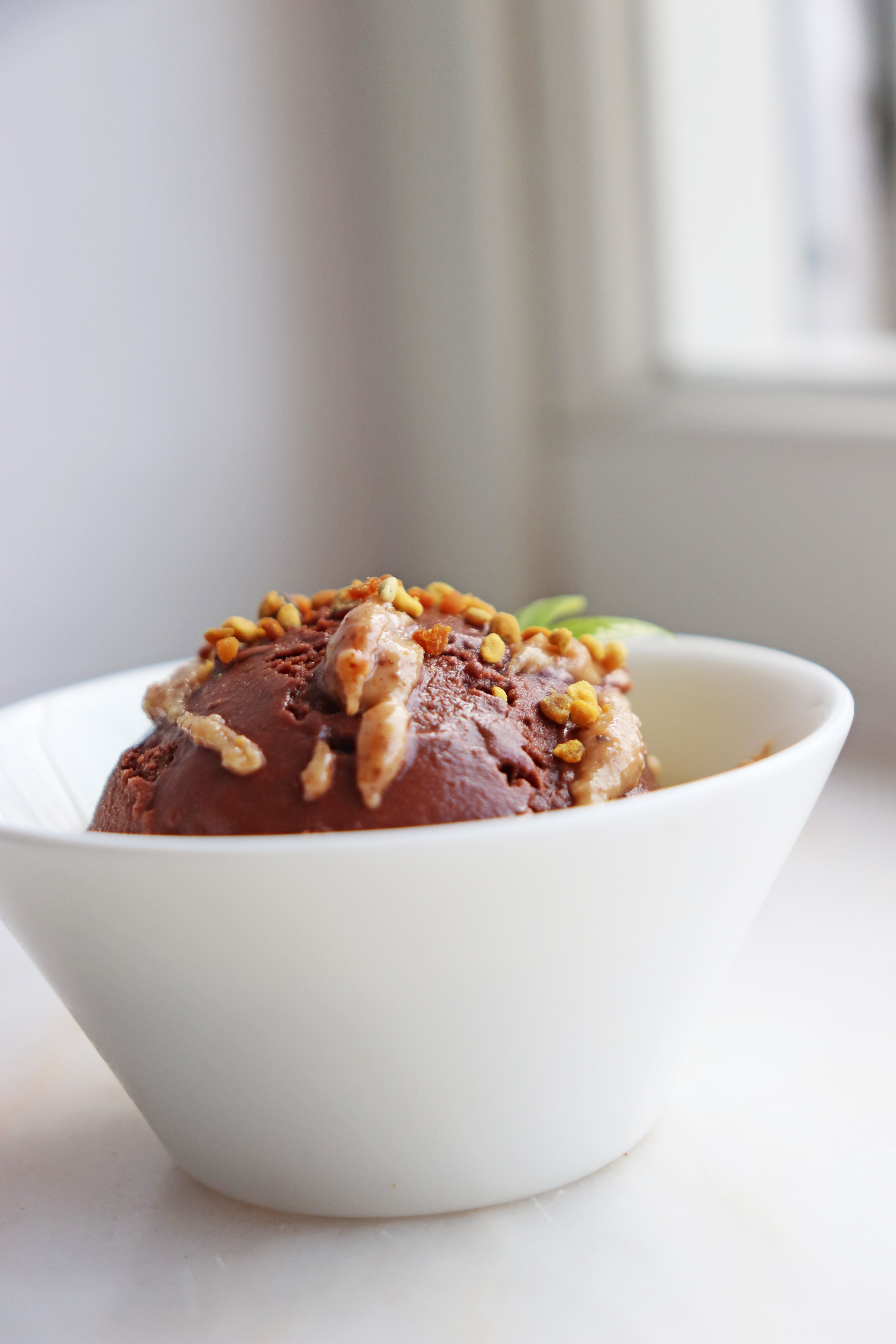 This is my absolute favourite. As the name suggests, it has a lovely intense chocolate flavour. However, it has a rather distinct carob-like flavour. Nowadays, I enjoy carob, however, it might be surprising and different for someone who has not had carob before. Anyway, I personally still find it is utterly delicious. Of course, it doesn’t taste exactly like your regular chocolate ice cream, but it still carries a beautiful creamyness and deep, intense chocolate flavour, that once wishes for in an ice cream. I REALLY love this flavour and would say that I am slightly addicted, haha. 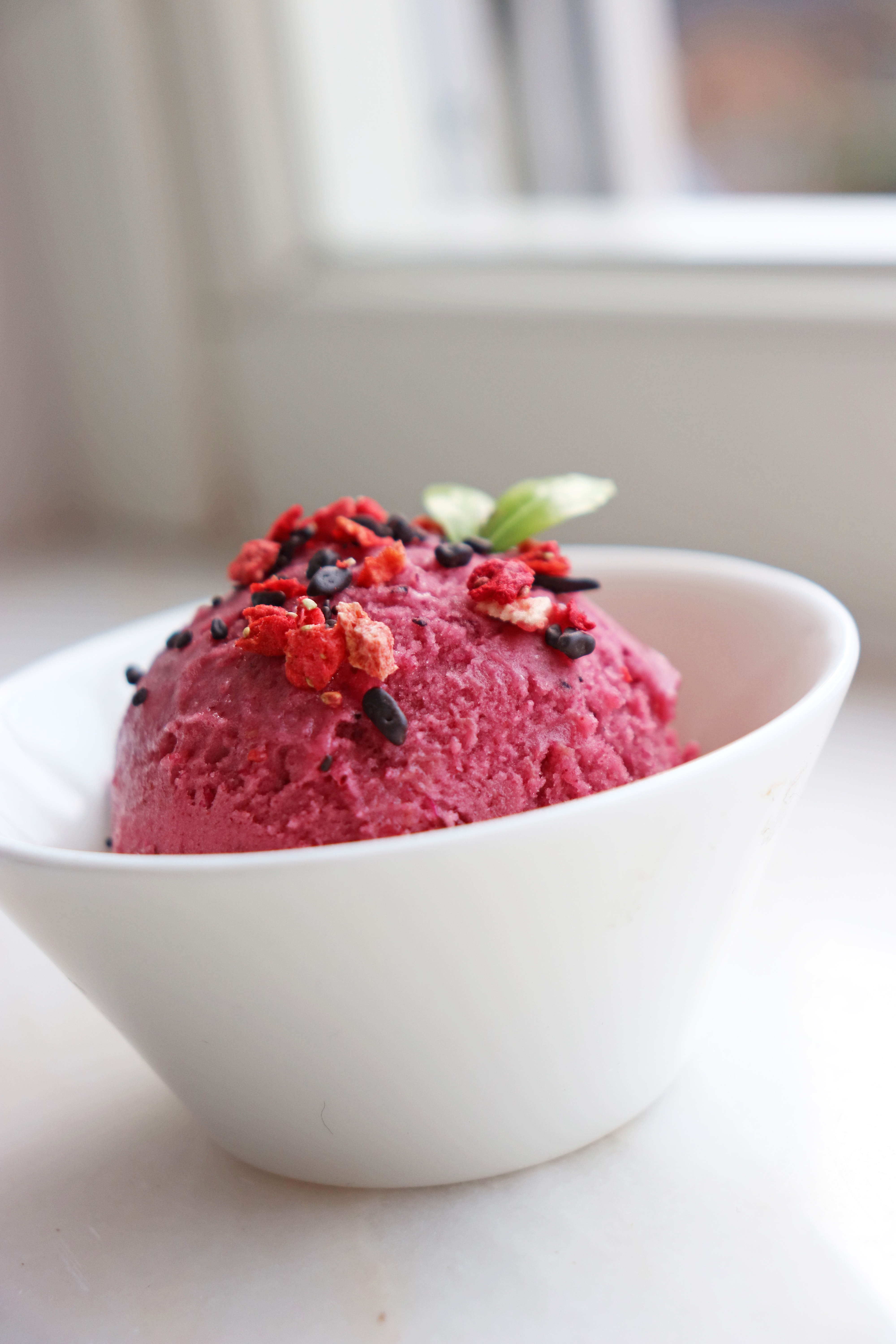 Similarly to the intense chocolate, the name of this flavour describes itself very well. It is bursting with flavour and is so refreshing, yet creamy at the same time. Most importantly, the berry flavour is intense but perfectly balanced. Unlike with some berry ice creams, Frill did a good job on not making it too sour. I think it tastes a lot like an intenser and more genuine version of a Twister lolly, which is a nostalgic-filled childhood memory of mine. I really like it and love pairing it up with some of the Intense chocolate flavour. Yum! 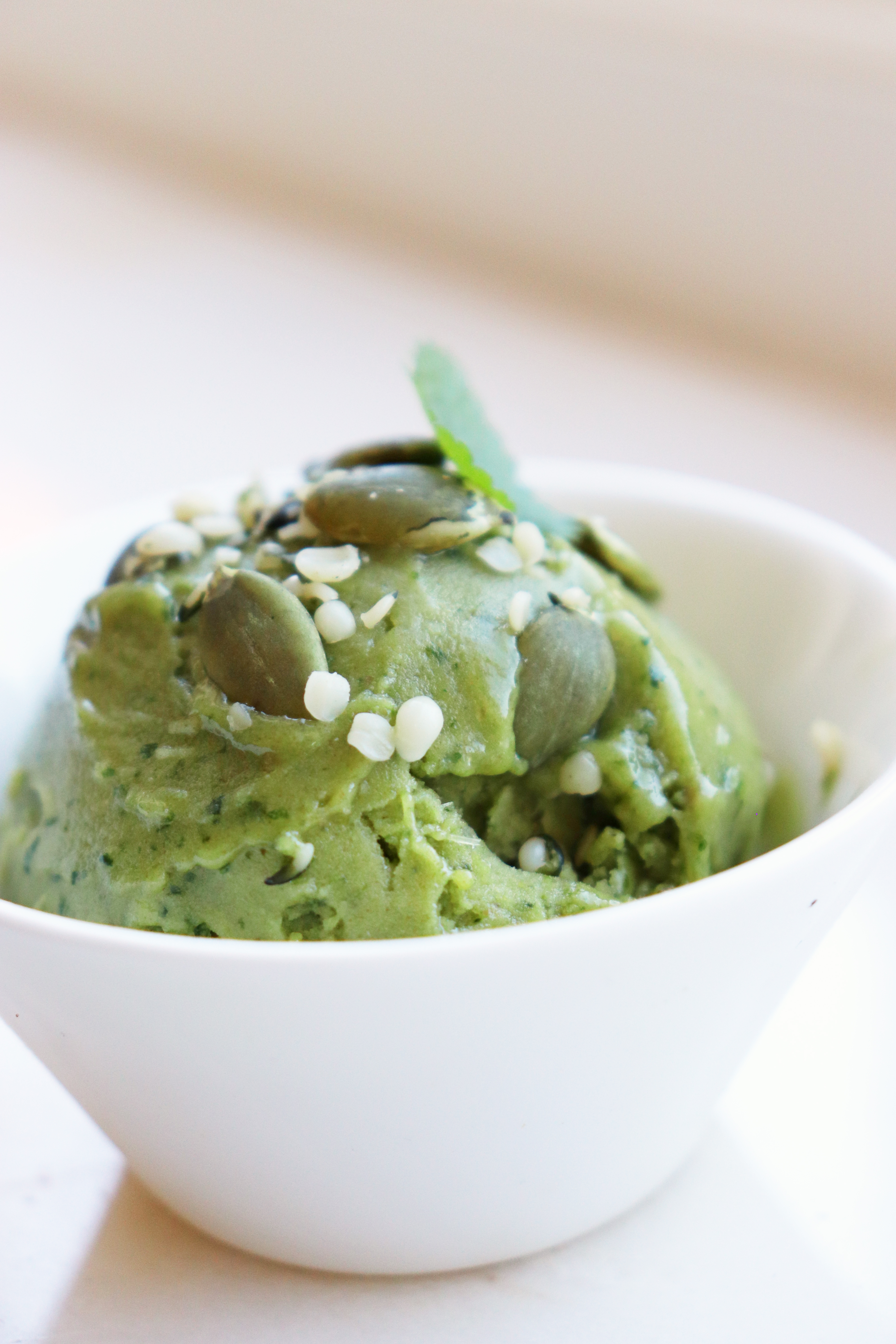 Refreshing green certainly was refreshing. However, I find that the Bursting berry is even more refreshing and delicious. It contains a bunch of different vegetables and fruit, hence the colour. Unlike what you might except, it doesn’t taste like a green smoothie nor juice. It is not as intense flavour wise as the other two, but it has a mellow, delightful tropical vibe to it. The significant amount of pineapple and mango in it may be the explanation to the tropical vibe. This flavour also tastes similar to a Twister, just more subtle than the Bursting berry. I enjoyed it, but I definitely do prefer the others. 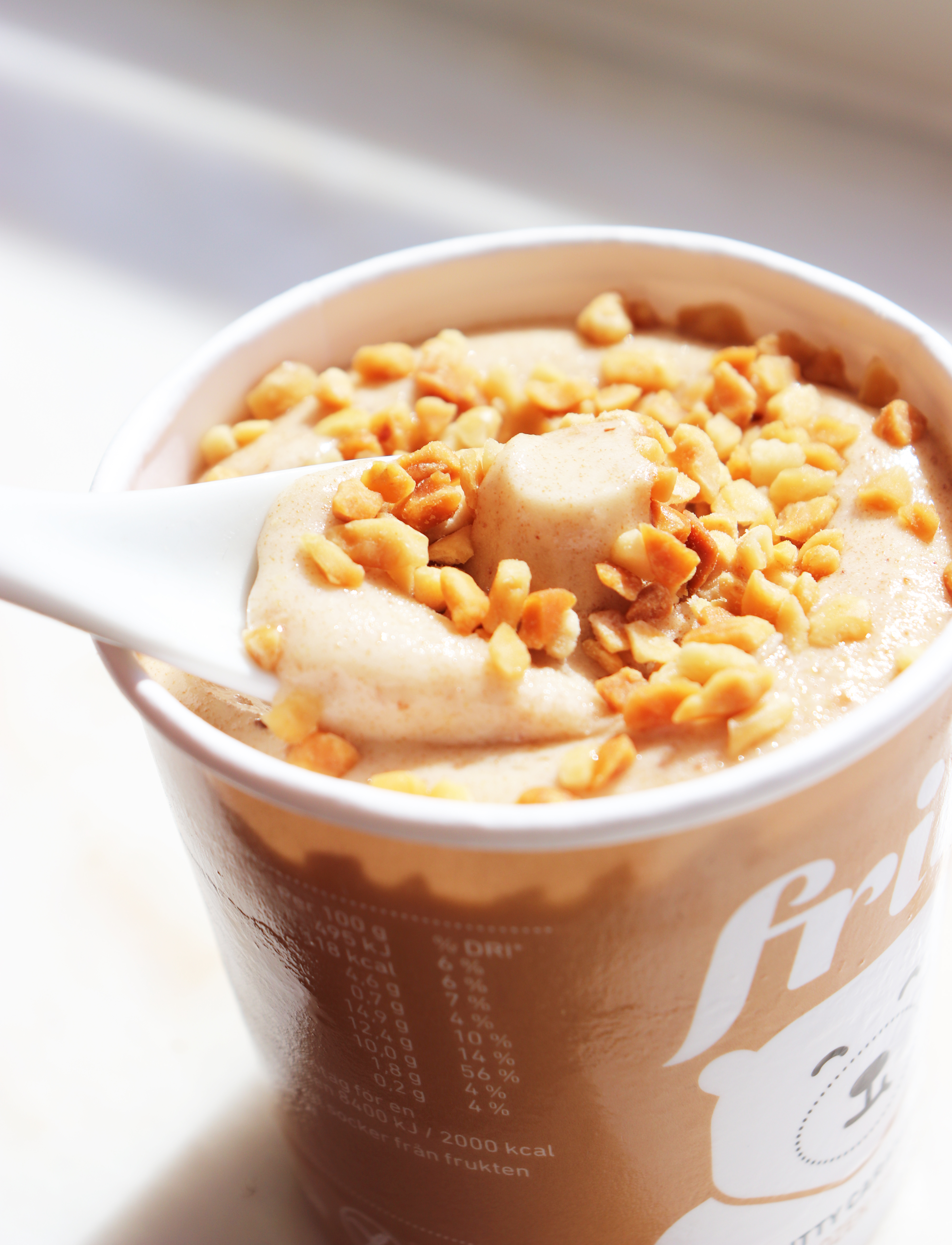 (Not the best picture quality. It’s an old picture, but you can find newer and better ones further up in this post)

On the packing, Frill recommends letting the ice cream thaw for a couple of minutes before serving. I really like how it actually doesn’t melt and stays creamy for a long amount of time. The thickness of it thawed is kind of like soft serve, soft yet solid enough. It basically stays in that “perfect not too solid nor too melty” state forever. It’s very creamy, yet it doesn’t taste “fatty”, which I really like. Despite the fact that I do absolutely adore having chocolate bits and such in my ice cream, I find texture to be absolutely spot on. I wouldn’t say it’s like nice cream creamy at all, it’s more like a proper good sorbet creamy, if you know what I mean. Also, the nutty caramel flavour’s texture is even creamier.

As it says on the packaging, it basically is a frozen smoothie. It simply is fruit + some added fiber, soya lectin and some natural flavouring. It is not made out of only “whole foods”, but to be honest, added fibers nor soyalectin and natural flavourings do any harm to your body (Of course, as long as your body can handle the fiber, which sits at 35g/pint.) It is very low in calories, around 350 per pint, an outstanding source of fiber and offers a great amount of vitamins. No added sugars, oil or anything like that!