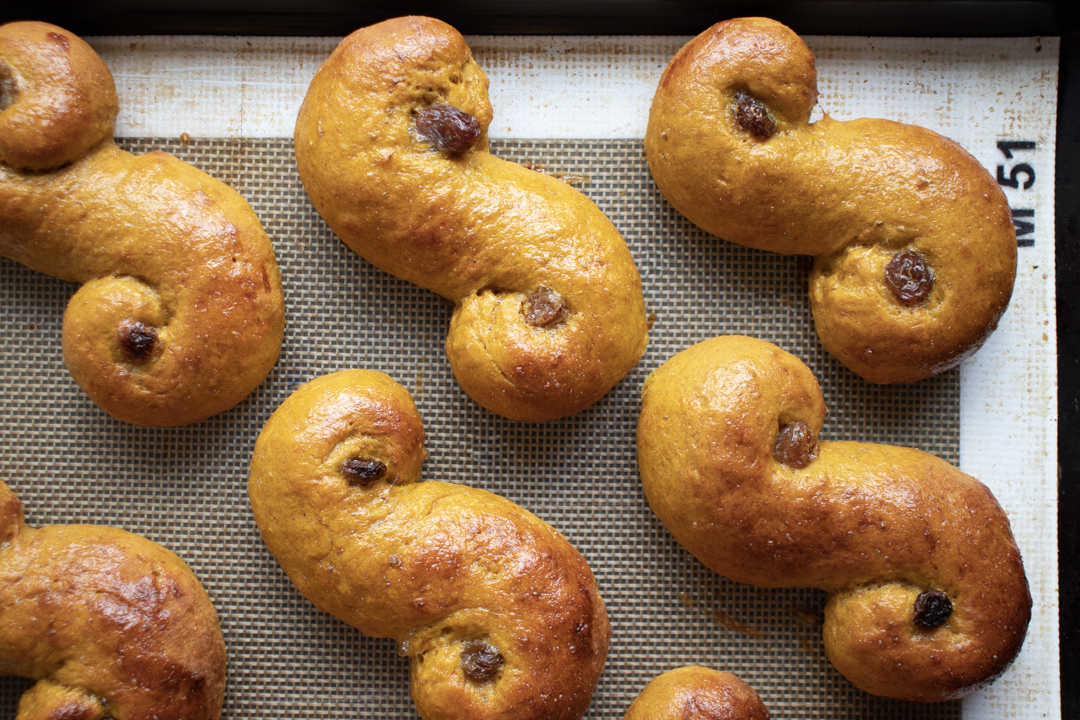 “What is this?”, you may be thinking. “A yellow bun with a spice I’ve only had in paella?!”

How should one properly explain the pure love we, Swedes, feel for this simply delightful bun of goodness? Listen to me, if you couldn’t care less about what on earth these buns are, simply skip the part in italics. However, if you’d like to get a better understanding for the Swedish culture and this amazing treat, keep reading, or watch this hilarious yet educating video:

For a Swede, the 13th of December does not only mean that it’s only 11 days until Christmas, (as we celebrate it on the 24th), it is also one of the highlights of the year, literally.

During the winter, Sweden is very dark. Seriously, around 3-4 PM it’s pitch black outside. Therefore, Lucia, the most delightful and bright celebration of the year, certainly is needed.

Originally, Lucia is an old tradition from Sicily, celebrating the sacrifice that Lucia, the martyr saint, made. Everyone in Sweden knows the legend about Lucia. Lucia was a daughter of a rich merchant/duke, but she was extremely humble and kind. She even used to sneak out and give away all of her belongings to the poor. She had hundreds of suitors, who all begged for her hand. However, she refused to fall for any of them due to her strong belief in God. One time, when she visited a jail, where the sick and insane were locked in, one of the guards fell on his knees begging for her hand. He told her that she had the most beautiful eyes he had ever seen, and he wanted them to be his beyond anything else. Basically, he asked her to marry him, in a very odd way. Anyhow, without hesitating, she used her hands and took her eyes out, and gave them to him. He started screaming and calling her a witch. Later, she was sentenced to be burned alive on a pyre, tied to a wooden stock. The legend goes that she was not consumed by the flames, and that suddenly she obtained new bright blue eyes (she used to have brown eyes before the removal), that God had given her as a reward for her faithfulness. Because the fire didn’t even touch her slightest, she was later killed with a sword through her throat.

As a result, every 13th of December we celebrate Lucia, the bearer of light. Regardless of where you go on the 13th of December, Lucia is celebrated. It’s a tradition celebrated everywhere from schools, churches, hospitals, kindergartens, to retirement homes. The way of celebrating can be as simple as eating a traditional Swedish saffron bun, “Lussekatt”, “Lucia’s cat”, also known as “Lussebullar”, “Lucia’s buns”, drinking mulled wine and eating ginger bread or by attending a traditional Lucia “performance”, “Luciatåg”.

In these “Lucia performances”, there always is one person person who is chosen to be Lucia, who gets to lead the procession wearing a long white gown, a kind of crown with candles, representing the light, and an extra thick red ribbon, symbolising the blood from the sacrifice, tied around his or hers waist. In the old days, only a girl could be chosen to be Lucia, but nowadays anyone can be chosen. Some controversy is still around non-female Lucias, but that is in my opinion simply dumb. The rest of the girls in the procession are called”tärnor”, “maids”. They hold lit candles and wear the same kind of white gown as the Lucia, but their red ribbons around their waists are thinner than Lucia’s. Boys usually are “stjärngossar”, “star boys”, and also wear the same kind of white gown. However, they also wear a special kind of paper cone hat and carry a special stick with a star attached to the end. Less traditionally yet super cute, smaller children often are dressed up as gingerbread men or elfs.

Special songs are sang during the “Luciatåg”, and most Swedes know them well enough to sing a couple from memory, always with pride. I, myself, have actually been Lucia twice, once in church, as I sang in church choir for four years, and in year nine, my last year before heading off to the Swedish equivalent of High school. Being Lucia, leading the “Luciatåg”, and singing solos certainly is an amazing experience. I truly recommend Googling “Luciatåg”. There are many beautiful clips and videos of traditional Lucia processions to watch. Interestingly enough, every year, a National Lucia is elected to lead the “Luciatåg”, that is not only held in Sweden’s capital, Stockholm, but also aired on national TV. Airing the performance on national TV enables every person in the country to watch and take part in such a beautiful and important tradition in the comforts of their home. Also, this national Lucia basically receives a status, comparable to someone like miss America, for the rest of the year.

In summary, I absolutely adore this celebration. It’s filled with so many bright and happy memories from when I sang in church choir. Honesly, I still get goose bumps when I hear some of the traditional Lucia songs! I hope you, guys, have learned something new today. Also, I’d love to know what traditions you have in your countries. Please, do comment and tell me down bellow! Sending you guys lots of love, and have an amazing day!

The most traditional way to make Lussekatter is to shape the dough into S shapes with a raisin in each swirl (you can see how to shape your buns in the video above). However, there are many other creative ways to make your buns a little more interesting. The ones displayed bellow are actually still rather traditional. 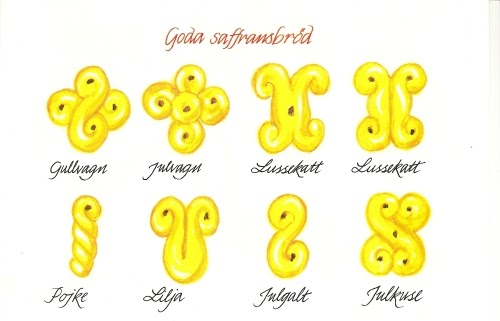 Another less traditional way to shape your dough, that has become more common, is to braid the it. I actually found braiding the dough helped the bun to stay moist for longer, at least compared to regular S-shaped buns. If you’d like to try braiding your dough yourself, here is a great video made by BakaMedFrida. Note: When braiding the dough, I decided to incorporate the raisins into the dough instead of topping it with them.

This is a very old picture from December 2017 (Luckily I have improved my photography since then). I though sharing this picture could help give you an idea of what braiding the dough results with.

Yes, I could help myself. I am experimenting with making short clips for my recipes. Note that the music in the video is the most classic Lucia song in existence, “Natten går tunga fjät”. 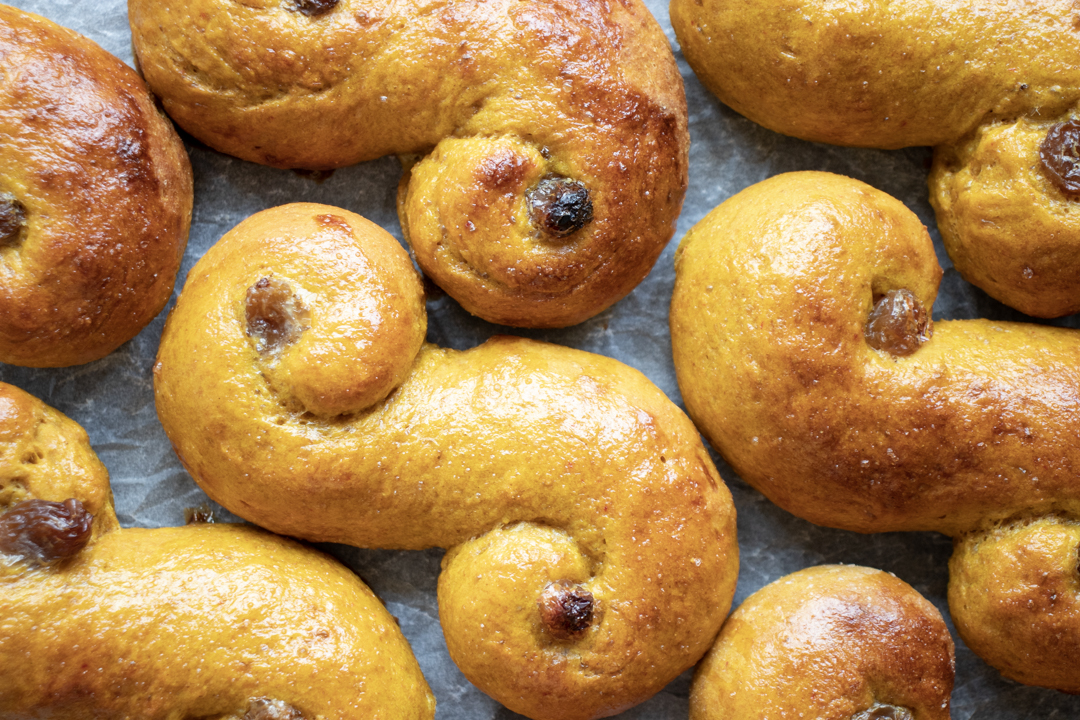 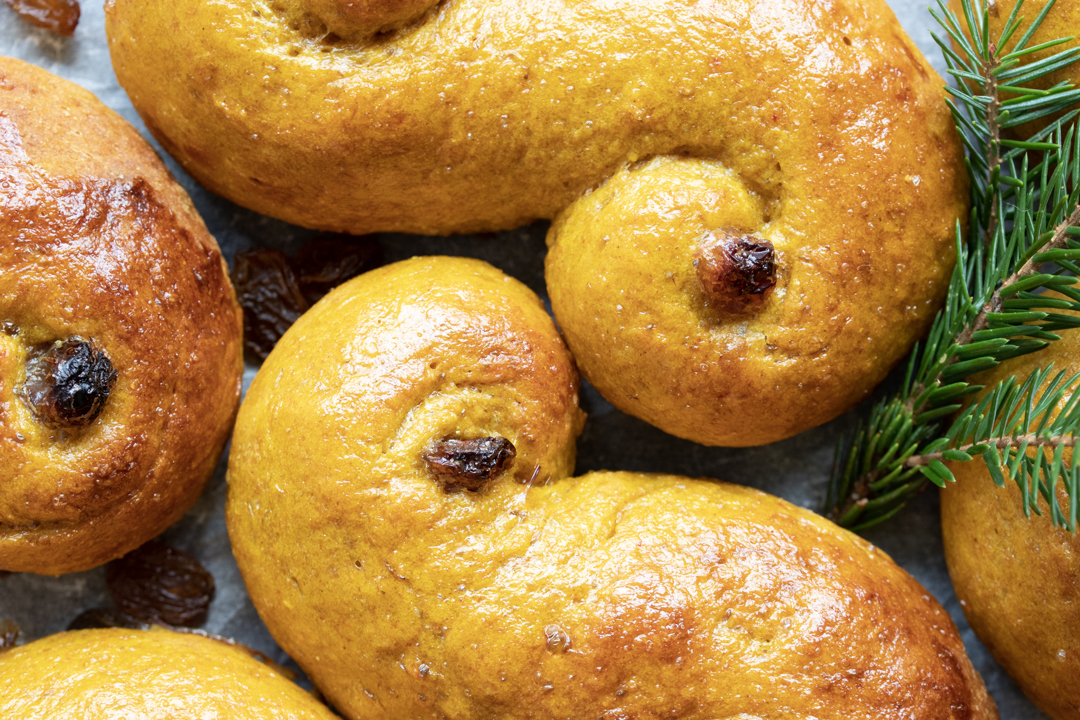 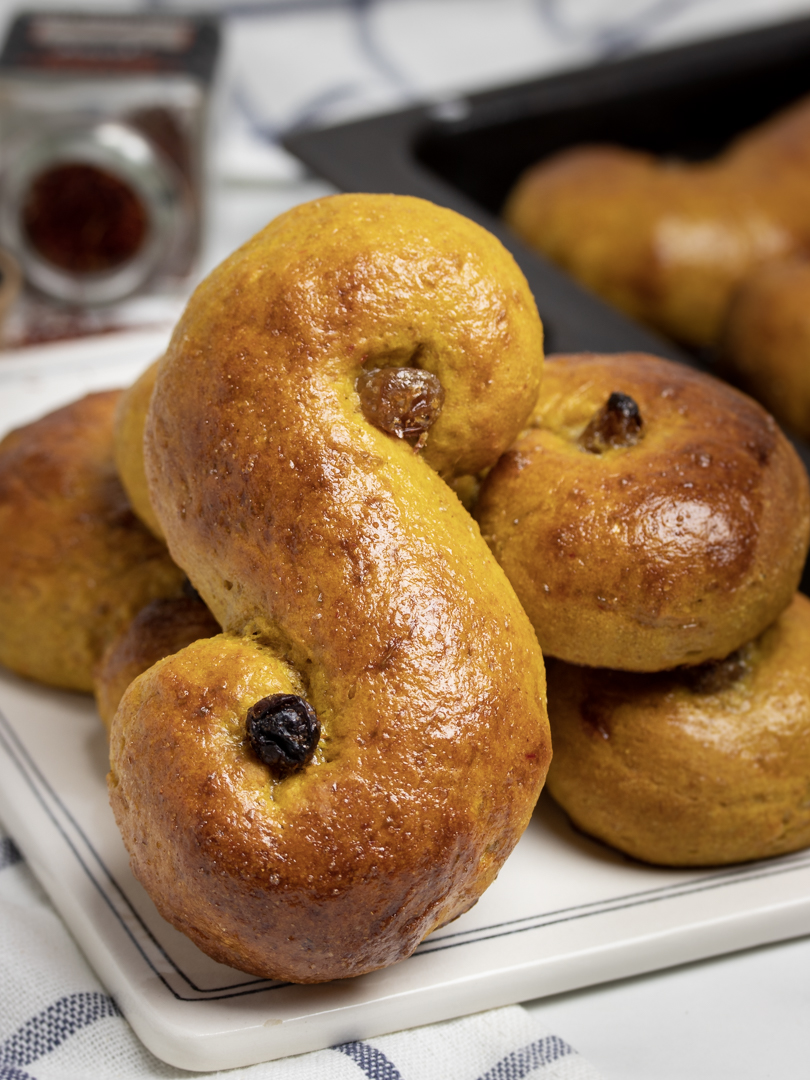 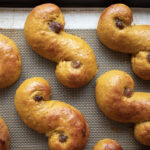 These S-shaped raisin inserted saffron buns, lussebullar, are a must at any occasion during Christmas in Sweden especially on the 13th of December when Lucia is celebrated.

*If you use less than 60g of sweetener your risk not feeding the yeast enough, which will result in your dough and buns not rising.

If you want to make it into a braid here’s a link for a great video made by BakaMedFrida. When braiding the dough, I decided to incorporate the raisins into the dough.